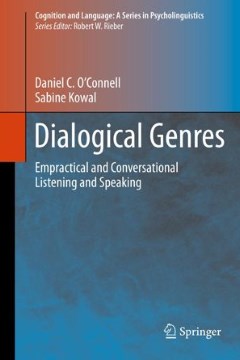 empractical and conversational listening and speaking

What happens in everyday dialogue? The authors revert to a rich prehistory to answer this question: Philipp Wegener in the late 19th and Karl Bühler in the first half of the 20th century in the German traditions of philology and psychology. Their work culminated in the concept empractical speech. This groundbreaking book opens up a new view of language use in settings in which participants are primarily involved not in speaking but in some non-linguistic activity and in which theneed for speech arises only occasionally. Behold empractical speech, a genre unto itself with respect to conversation – an ubiquitous phenomenon of everyday life and the very setting of early language acquisition.

Is this table of contents incomplete? Click here to add the missing references

This document is unfortunately not available for download at the moment.